Virotherapy is a treatment using viruses as therapeutic agents for disease therapy. There are three types of virotherapy, including oncolytic virotherapy, viral vectors for gene therapy, and viral immunotherapy. Oncolytic virotherapy is destroyed by cancer cells by oncolytic viruses without affecting normal cells. Viral immunotherapy uses the virus as a carrier vector to deliver an immune-stimulating antigen to start the immune system. Viral gene therapy is based on the use of genetically engineered viral vectors to deliver therapeutic genes to cells with genetic malfunctions. Today, virotherapy has been combined with chemotherapy and/or radiation in some trials. 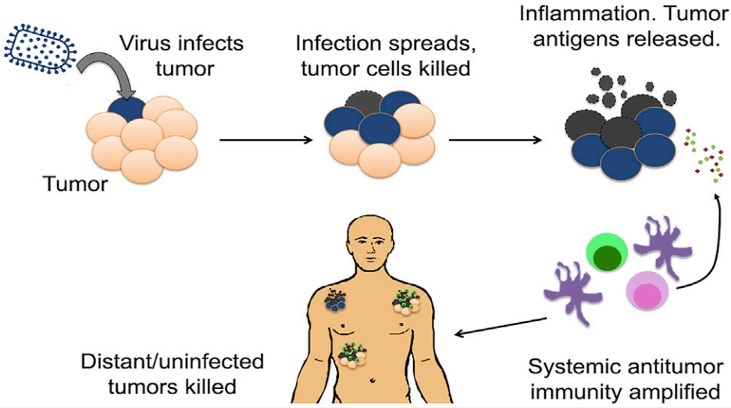 Oncolytic virotherapy can be defined as the use of viruses as antitumor agents to eliminate malignant cells by viral propagation inside the tumor. Most viruses in nature have a tropism for malignant cells, such as measles virus, vaccinia virus (VACV), herpes simplex virus (HSV), and much more, which makes them suitable for oncolytic use. For oncolytic virus engineering, the viruses can be manipulated to reduce pathogenicity and immunogenicity. In some cases, the oncolytic viruses can be designed to express cytokine/chemokine or secret antibodies to boost the anti-tumor immune response. Immune checkpoint inhibitor-expressing oncolytic viruses have also been developed to reduce toxicity and increase efficacy, including antibodies of anti-programmed cell death-1 (PD-1) and anti-cytotoxic T-lymphocyte antigen-4 (CTLA-4).

Viral gene therapy is based on the viral vectors as drug-delivery vehicles to introduce therapeutic genes, regulatory RNAs, or other therapeutic substrates into cells. There are two main types of viral vectors including integrating or non-integrating, depending on whether the recombinant vector integrates its viral genome into the host cell genome. Lentiviruses are the commonly used integrating vectors that can transduce non-dividing and dividing cells. The non-integrating vectors such as adeno-associated virus (AAV) vectors and adenovirus (Ad) vectors have also been used for the gene transfer. In addition, the vectors based on the HSV, VACV, and baculovirus have been developed for disease treatment. Among them, the baculovirus is widely used to express heterologous genes in cultured insect cells and insect larvae. 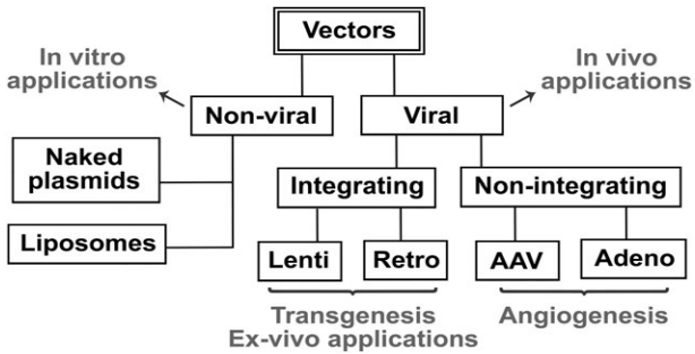 Viral immunotherapy is a method to stimulate the body's immune system by the virus. The genetically engineered virus is an important part of viral immunotherapy that can present a specific antigen to the immune system. The antigens include virus/bacteria or even human disease antigens. Cancer vaccines are another method of virotherapy that works through attenuated or inactivated viruses. They can incite a natural immune response in the host and the host will develop potentially life-long immunity. Viral immunotherapies have been widely used in cancer treatment because they can stimulate the immune system to better fight cancer cells.