Small-molecule drugs such as aspirin and diphenhydramine are low molecular weight and chemically synthesized, and have a known structure. These kinds of drugs played an important role in shaping the world we live in and became the pillars of traditional medicine. Most drugs on the market today are small molecule compounds. In contrast to small-molecule drugs, biologics are largened molecules extracted from living organisms and have complex heterogeneous structures. Biological drugs are also called biological agents including antibodies, interleukins, nucleic acids, cells, vaccines, etc. They are the most advanced therapies available and used for the treatment of numerous diseases and conditions. 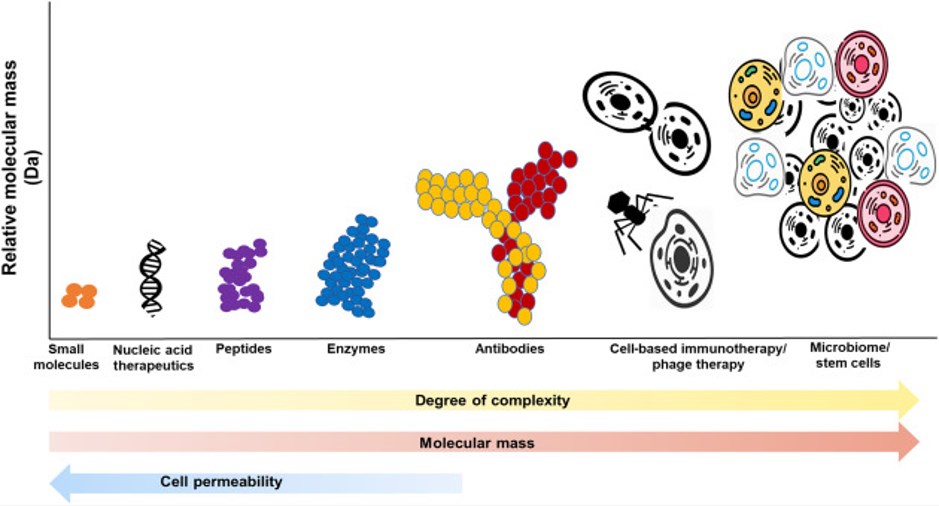 Small molecules are a low molecular weight of < 900 Da and constitute 90% of pharmaceutical drugs. Owing to their small size, they can easily cross the outer plasma membrane to interact with targeted molecules present inside a cell. The development of small molecules is usually cheaper than biologics and easy to synthesize by chemical reactions. Many small molecules are designed to be metabolized from an inactive prodrug to an active compound, and mostly taken orally by the patients. After being absorbed by the human body, they are easily distributed and metabolized to an active drug, and then excreted out from the system. A classic example of a small molecule is penicillin, which was first discovered in 1928 and is now the world's most widely used antibiotic. The discovery of penicillin changed the course of medicine and has enabled physicians to treat threatening illnesses including bacterial endocarditis, pneumococcal pneumonia, gonorrhea, meningitis, etc. During World War II, penicillin successfully reduced the death rate of bacterial-related pneumonia to less than 1%. Despite the emergence of many biologics, small-molecule drugs remain highly prevalent and cannot wholly be replaced by biologics in the future.

In 2016, eight out of the top 10 global best-selling drugs were biologics, which seem to be approaching the era of biologics. Biologic drugs are produced from living organisms, including vaccines, blood, blood components, cells, allergens, genes, tissues, and recombinant proteins. They are widely used for the treatment of hard-to-treat diseases such as cancer, autoimmune diseases, and inheritable diseases. Biologics can fill the unmet clinical needs that small molecules cannot address. Currently, biologics have shown clinical benefits and will have a significant impact on human health with the expansion of the field. The exorbitant cost is one of the factors that hinder the use of biologics. Unlike small molecules, the structure and composition of biologics are complex, requiring significant cost and advanced manufacturing techniques. In addition, the increased complexity of biologics raises unexpected safety issues that require significant efforts to understand and monitor in preclinical and clinical studies. Biologics will continue to flourish and become an important component of the drugs of the future.

The biggest difference between small molecules and biologics is their size and sources. A small molecule drug is low molecular weight and a synthetic chemical derived from or inspired by natural products, while Biologics are drugs made from complex molecules manufactured using living microorganisms, plants, or animal cells. In the manufacturing process, small molecule drugs have a well-defined structure and are easily chemically synthesized, while biologics have a more complicated structural character and are generally more time-consuming, challenging, and expensive. In clinical use, biologics are very target-specific and present great value to target more difficult to treat populations. In addition, the absorption, distribution, metabolism, excretion, and toxicity (ADME) properties of biologics are very different from traditional, low molecular weight drugs.