Genetic diseases are usually caused by errors or mutations in genes that lead to loss or change of their function. By the change in genetic material, multiple diseases can be treated. As a promising treatment option for genetic diseases, gene therapy involves repairing, repressing, or replacing dysfunctional genes to reestablish normal function. Currently, gene therapy is a hot area in the biotech industry and many treatments are developed and approved. The gene therapy market size was estimated to be USD 2.26 billion in 2020, having increased at a compound annual growth rate of 20.4% from 2021 to 2028.

The concept of gene therapies first emerged in the 1960s and early 1970s. Scientists speculated that DNA sequences could be introduced into a patient's cells to treat genetic diseases. There are some most important milestones in the history of gene therapy. The structure of DNA was characterized by a double helix in 1953, which gave rise to modern molecular biology. In 1990, the first gene therapy clinical trial was conducted using new viral vector technology. The Food and Drug Administration (FDA) approved the first clinical trial using an LVV in 2002 and the National Medical Products Administration approved the world’s first commercially available gene therapy to treat squamous cell carcinoma in 2003. Since then, FDA has approved a series of gene therapy approaches.

There are several ways to correct defective genes to help your body better fight disease. 1) By replacing mutated genes, some diseased cells can go on to work properly. For instance, several types of cancer are associated with the p53 gene, which prevents tumor growth. Using gene therapy to replace the defective p53 gene, the cancer cells may be killed. 2) By fixing mutated genes, the healthy genes can help prevent disease and the mutated genes no longer promote disease. 3) By making diseased cells more evident to the immune system, gene therapy can help the immune system attack the diseased cells.

The emergence of highly versatile genome-editing technologies promotes the development of gene therapy. The gene-editing technologies open up new opportunities and provide researchers with the ability to flexibly introduce modifications into the genomes of a broad spectrum of cell types and organisms. Transcription activator-like effector nucleases (TALENs) and clustered regularly interspaced short palindromic repeats (CRISPR)-associated protein 9 (Cas9) are the most widely used new gene-editing tools. These tools have greatly expedited the progress of gene editing from concept to clinical practice. 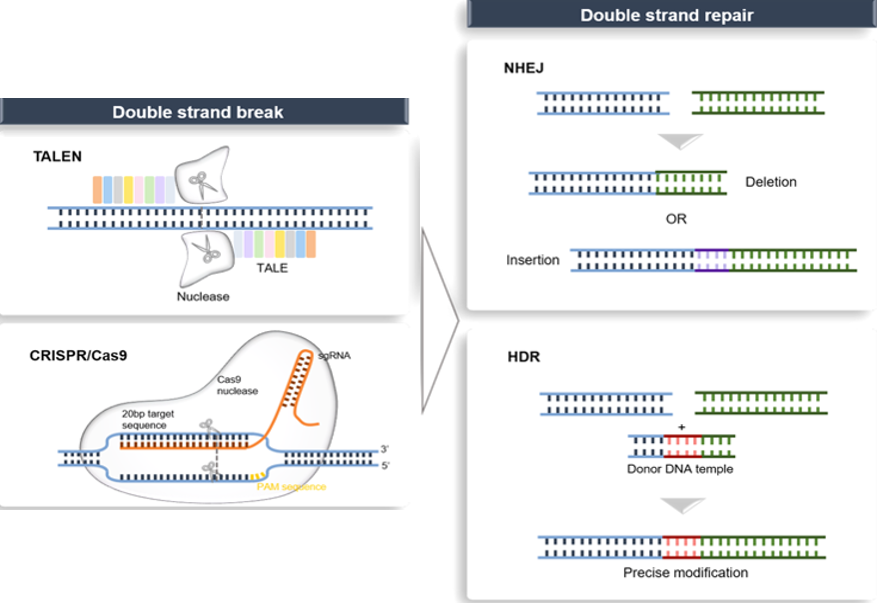