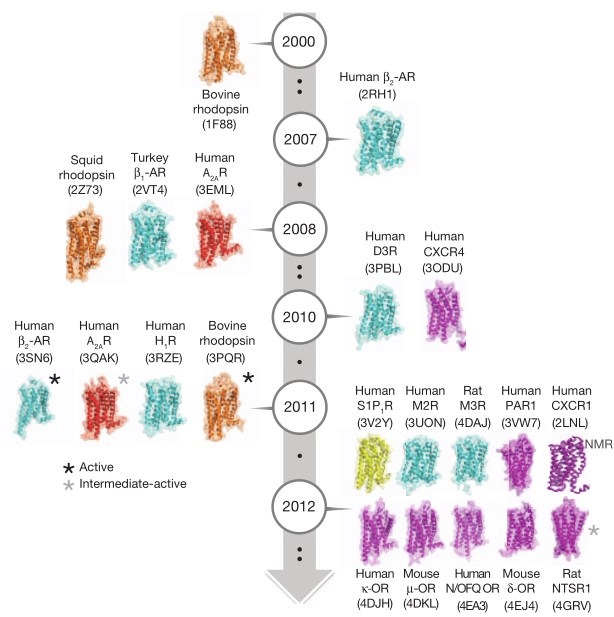 The flow of information across plasma membranes is essential to proper cellular function and coordination of bodily functions. G protein coupled receptors (GPCRs) play a significant role in signal transduction. GPCRs are widely expressed in the body and play a fundamental role in physiology and pathophysiology. As such, they are potential targets for therapeutic intervention in most diseases. Drugs active at GPCRs have therapeutic actions across a wide range of human diseases ranging from allergic rhinitis to pain, hypertension, and schizophrenia. As a world-leading biotechnologies company, Creative Biolabs has kept in touch with the development of GPCRs research and established mature platforms including structure analysis, function detection, and novel target discovery of GPCRs. It is our pleasure to introduce our studies about GPCRs to our partners all over the world.

GPCRs represent the largest superfamily and most diverse group of mammalian transmembrane proteins, which mediate most cellular responses to hormones and neurotransmitters, as well as being responsible for vision, olfaction, and taste. The main characteristic feature of these proteins is that they share a common seven-transmembrane configuration. It is estimated that the structural variations described above have given rise to over 800 unique GPCRs in five families. While the rhodopsin family is by far the largest and most diverse of these families, and members are characterized by conserved sequence motifs that imply shared structural features and activation mechanisms. 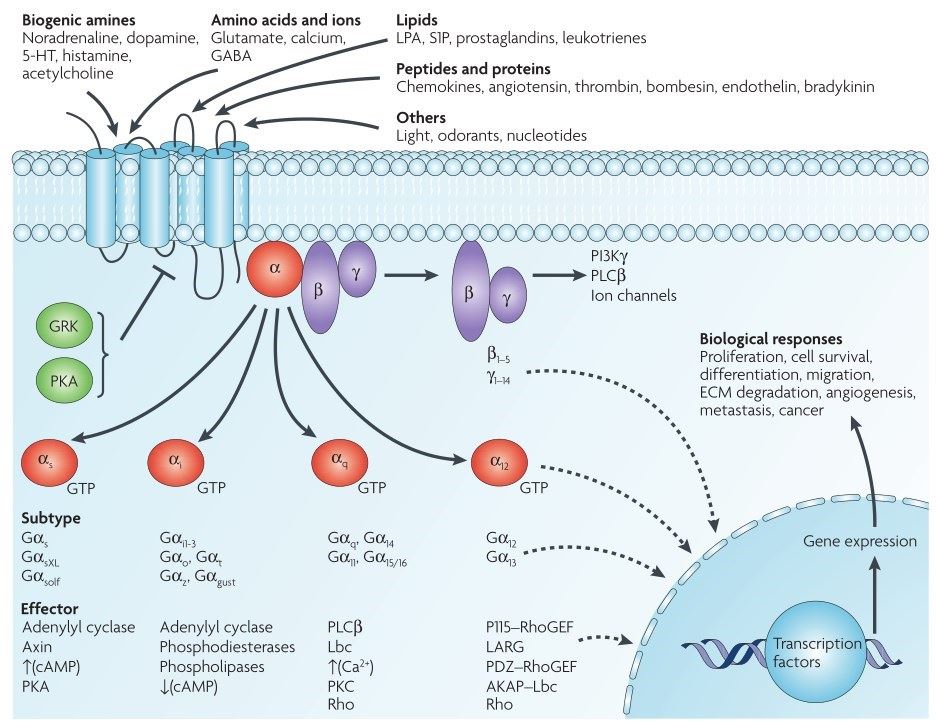 Much of vertebrate physiology is based on GPCR signal transduction. Like the receptors for hormones, neurotransmitters, ions, photons, and other stimuli, GPCRs are among the essential nodes of communication between the internal and external environments of cells. The classical role of GPCRs is to couple the binding of agonists to the activation of specific heterotrimeric G proteins, leading to the modulation of downstream effector proteins. Extracellular ligands act as the “first messenger” to recognize and bind on the specific GPCRs, while the signaling molecules that transmit signals from the GPCRs to the rest of the cellular machinery are often referred to as “second messengers” and can significantly amplify the signal strength by activating downstream cellular machinery. GPCRs are regulated by many kinds of ligands including full agonists, partial agonists, neutral antagonists, and inverse agonists, which motivate or reduce the bioactivity.

Estimates vary regarding the number of GPCRs, the largest family of membrane receptors that are targeted by approved drugs, and the number of such drugs that target GPCRs. As of November 2017, 134 GPCRs are targets for drugs approved in the United States or European Union, while approximately 35% of approved drugs target GPCRs. Drugs that currently target GPCRs and GPCR-related proteins are primarily small molecules and peptides. However, the endogenous ligands of more than 140 GPCRs remain unidentified, leaving the natural functions of those GPCRs in doubt which are so-called GPCRs.

Although lots of GPCRs targeted drugs have been developed, there is huge potential in the application of GPCRs in novel target discovery. Based on our rich experience and skilled groups, Creative Biolabs has gained some achievement in the novel target developments. If you are interested in drug target development or other fields in therapeutic molecular development, please feel free to contact us.