Drug discovery is a highly interdisciplinary endeavor that involves a multitude of specialty areas and can be characterized in multiple steps. Generally, it starts with target identification and validation, followed by lead identification and optimization, then progresses to preclinical studies on animals and ends up with clinical trials in humans. Fragment-based drug discovery (FBDD) has been acknowledged in the past two decades as a powerful tool for the rational design of drug leads.

FBDD, as it is commonly known now, started about 25 years ago. In its earliest years, it was often referred to as Fragment-Based Lead Design and later on (and even now sometimes) as Fragment-Based Drug Design. The FBDD approach relies on hit generation by starting with stable molecular fragments that share common features: typically, a molecular weight of <300 Da, cLog P3 (a measure of hydrophilicity, with low values enhancing absorption), and the number of hydrogen bond donors, or acceptors, of 3 or less. The number of rotatable bonds of 3 and polar surface area of 60 Å2 may also be useful criteria for FBDD. Such fragments are smaller than regular lead-like molecules in drug discovery and are said to be Rule of Three (Ro3) compliant based on their chemical size and composition. The first example of FBDD can be traced back to seminal work published from Abbott Laboratories, IL, USA on structure-activity-relationships SAR by NMR in 1996. Since then and until ~2010, FBDD played a prominent role in the early drug discovery programs of many pharmaceutical companies. Since then, FBDD has grown to be an integral part of many drug discovery efforts in both industry and academia. 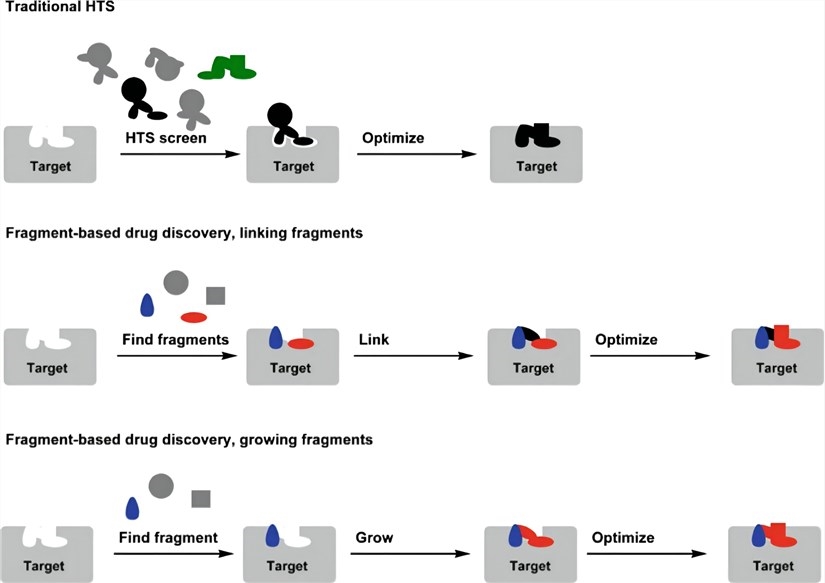 FBDD has become a powerful approach in the discovery of new lead compounds. Screening of smaller fragments affords a series of advantages over the traditional high-throughput screening (HTS) including the superior sampling of chemical space and higher hit rates. The first step of the FBDD process consists of the identification of fragments that weakly bind the target protein, typically in the micromolar to millimolar affinity range. Due to the weak affinity of the fragments for their targets, biophysical techniques sensitive towards micromolar to millimolar affinities are required to identify hits; among them, Nuclear Magnetic Resonance (NMR), X-ray crystallography, and Surface Plasmon Resonance (SPR) are the most widely used. In a second, iterative and time-consuming step, the fragments that form high-quality interactions are optimized into lead compounds exhibiting higher affinity and selectivity, through the so-called fragment growing, fragment merging, or fragment linking strategies.

It has been around 25 years since the first experimental description of FBDD. Since then, numerous compounds have emerged from programs of FBDD and entered the clinic. FBDD is established in large pharmaceutical companies, small and medium biotechnology companies, and academia, where it is being applied to an increasing range of targets. One attraction of FBDD is that with a relatively small library of compounds it is possible to achieve vastly greater coverage of the available chemical space than even the largest HTS libraries. FBDD is able to tackle difficult and novel targets, which may be less amenable to HTS, it has been taken up by an increasing number of academic groups, and it offers the potential to generate both novel drug leads and selective chemical probes of protein function and biology. 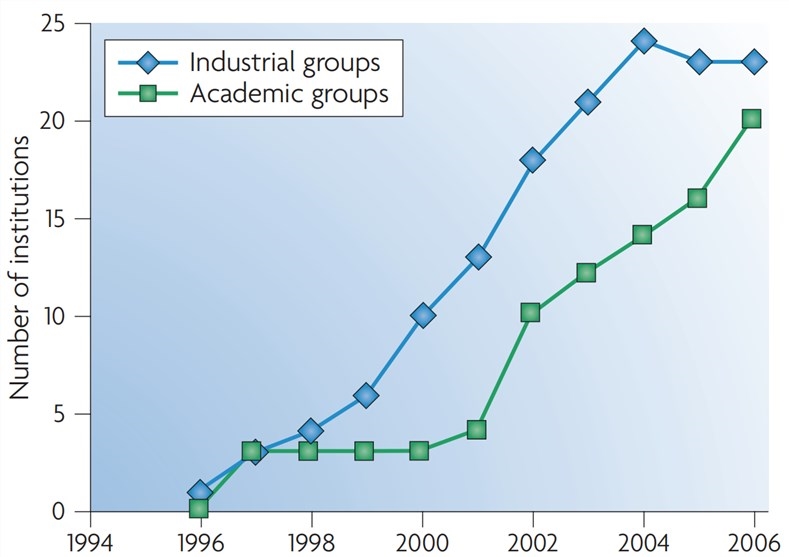 Fig.2 Trends in the application of fragment-based screening. (Hajduk, 2007)

Fragment-based drug design is an important method in drug discovery. Creative Biolabs has a comprehensive drug discovery and research platform open to global customers. If you are looking for partners or you have any questions about our services, please don't hesitate to contact us for more information.